Star Trek is cool again! That was the vibe from last nights special fan event held at Paramount Pictures.

Considering very little detail about the event was released prior, it was a spectacular affair with Paramount pulling out all the stops for an epic celebration that went ‘beyond’ showing us a trailer for the new movie. The event also encompassed a celebration of 50 years of Star Trek with Hollywoods biggest names like Rihanna and Slash paying tribute to the franchise and declaring their Trekkie status.

When we arrived at Stage 31 we were led through an Enterprise corridor to reveal the bridge style theatre where the Q&A’s would take place. 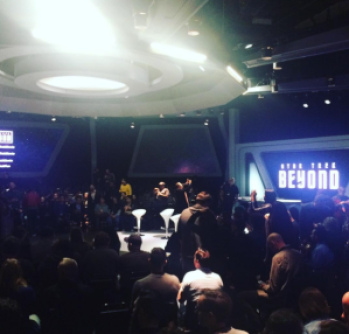 The Q&A was moderated by Adam Savage from Myth Busters (and huge Trekkie) who sadly didn’t blow anything up.

JJ. Abrams and Justin Lin spoke very well about the importance of Star Trek and how highly they regard the Star Trek fan base. JJ then mentioned the Axanar lawsuit which probably made the Paramount/CBS legal department flinch more than we did although we know every word was very well prepared. He stated that Justin and he were not happy with the alienation of Star Trek fans caused by recent decisions and fan productions will be allowed to continue. We look forward to the influx of Kickstarters in all our Facebook groups.

JJ also announced that everyone in attendance at the fan event will receive an invite to the premiere of Star Trek Beyond which will be shown at San Diego Film and Comic Con on July 20th in an outdoor IMAX with live orchestra! We are assessing our airmiles, prospect of loosing our jobs and possibility of getting thrown out by our partners to attend this!

Then the moment we had tried to prepare for (with plenty of lipgloss) Chris Pine, Karl Urban and Zachary Quinto took to the stage! **Carry us to sickbay**

The rapport between them is like a current day version of Kirk, Spock and McCoy.

After a Q&A session, quiz and behind the scenes look at Star Trek Beyond we were invited outside to witness and celebrate the naming of the street ‘Leonard Nimoy Way’.

The Nimoy family turned up and we all toasted to the new street name. Zachary Quinto’s speech was the perfect balance of uplifting, celebratory and touching. This was a HUGE honour for us, one we are grateful and privileged to have been involved in.

**spoiler alert but nothing you couldn’t deduce from the trailer **

Next we piled in to stage 32 where we surrendered our phones to some beautiful Orion Girls (they just wanted your phone, guys, not your number!) and watched the trailer for Star Trek Beyond.

Firstly, what a wonderful and fitting idea to hold it in the very stage that was home to Star Trek The Original Series. To be in the very room where it all began was an inexperience in itself.

The trailer was fantastic of course. But the real treat was the extra scenes. These included a look at life on the Enterprise, a talk scene between Kirk and McCoy and the Enterprise getting destroyed.

We were stood next to Scott Mantz, film critic, producer of Access Hollywood and Uber Star Trek fan. He said out loud during the Kirk/McCoy scene “This is Star Trek”. And he is right. The extra detail they showed us demonstrates that this is a film about the characters and the family they have. And of course one of those characters is the Enterprise herself.

The destruction of the Enterprise is unlike any Starship demise we have seen, we don’t want to say much more detail than that as we can’t do it justice. It is much more realistic but just as heartbreaking.

With that, there was nothing left to do, but party and celebrate!!
With a free bar, great food, a Starfleet DJ and plenty of green girls, it wasn’t hard!

The rest of Stage 32 was revealed with props and costumes from the movie, transporters, a turbo lift, CAPTAIN KIRKS FRICKIN CHAIR!!!!

Overall it was an amazing night. We have so many people to thank. Firstly our Trekkie In Training Sarah for being a good TiT, entering the competition and winning! Tressa our Yeoman for the weekend for taking our photos and looking after us. Paramount Pictures for the tickets and hospitality. Larry Nemecek for introducing us to the ‘LA’ trekkie scene, we met some great people. And finally to Steve at Paramount security who worked on the Star Trek sets and stayed up into the wee hours with us on the studio lot with Larry and gave us an amazing insight into life on Paramount when Star Trek was filmed there.

Seeing the places where Rick Berman, Brannon Braga, Ron Moore and Gene Roddenberry worked was such an incredible experience and one we will treasure forever.