‘Klingon Karaoke’ on Thursday night we enjoyed listening to fans with incredible voices (and signing credentials to back them up) wow those of us mingling on the dance floor.

When Connor Trinneer, Dominic Keating and Chris Doohan took to the stage, the audience were in hysterics.

Then there’s the regulars who’s antics fill us casual attendees feed each August. Seeing the famous ‘Eric Allan Hall’ sing was a real treat. Eric is such a good Data cosplayer we can’t say for sure that he isn’t a Soong Android. 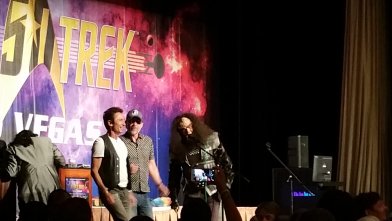 The day started by buying more MAC for Star Trek (we know, we don’t need to even insert the Picard face palming meme because you’re already imagining it!)

Star Trek.com presented the ‘Missing footage panel’ with Roger Lay Jr (Producer), and the production team Michael and Denise Okuda, Phil Bishop, Rod Roddenberry and Trevor Roth. This was a panel we were very much looking forward too. Like many of you we had heard the news that the Roddenberry Estate had in their possession a vast amount of footage from The Original Series.

Most of it was odds and ends from the beginning or end of a scene that were swept from the cutting room floor. But there are some gems amongst them. Our new favourite person Scott Mantz (who is always happy and chirpy – think Data scanning for lifeforms) was fortunate to see some of these cut scenes and was happy to spill the beans for us.

One of the clips was an extended and alternate scene from Guardian on the Edge of Forever; after the kiss between Kirk and Edith Keeler. Some additional dialogue is included where Keeler uses the word ‘forever’ connecting it to the title of the episode.

Another wow scene is from “Who Mourns for Adonais?”. An ending has been found where Spock and McCoy mention that Lieutenant Palamas is pregnant with Apollo’s baby!

Can you imagine watching these for the first time?! We think we know Star Trek like the back of our hand and now suddenly there’s something new after 50 years! We’ll get to see it at the end of this year!

For more details check out this Trekcore article which we had the pleasure of contributing.

Chase Masterson certainly had the best entrance to her panel. Cheerfleet (a troup of Starfleet Cheerleaders that we instantly regret not joining) marched onto the stage and did what cheerleaders do to welcome her onto the stage. They then presented her with her very own Cheerfleet uniform making her an honourary member!

Chase performed for the audience, belting out ‘Fever’. She spoke about her amazing work mentoring, standing up against bullying, working with the UN (seriously, if she was British she’d be knighted by now!).

Chase put in 110% effort into this convention. She sang every night at the Roddenberry lounge, her signers table was always full and she takes time to speak to everyone who visits her. When we caught up with her at the end of the convention she was exhausted (but still fabulous!) yet she still went on to sing to crowds later that evening.

Ohhh Myyy, its time for George Takei! The Leonard Nimoy Hall was PACKED! Takei (who is king of the internet) is a must see at conventions. He is inspirational not just for those of who are considered a minority in terms of their appearance or sexuality but for all us who aspire for a world of liberty and equality. Like the rest of the TOS cast he is a great role model for older people, something that all of us, if we are very lucky, will become.

He spoke about his upbringing, his parents, his internment and the fear of history repeating itself in light of the current political climate.

Now we don’t gamble but we had to place bets on how many audience questions it would be until someone asked ‘THAT’ question followed by ‘THAT other question’…. You know the ones. Gay Sulu and William Shatner.

They were second and third if you’re interested. His response to Gay Sulu was the same as is publically known. He felt it was a betrayal of Gene Roddenberry’s creation of the character Sulu and that it could be construed that Sulu was closeted. We have to agree with Simon Peggs logic on this and although we are surprised at George’s response we respect that even though he would have seen that most fans disagree with with, he has not backtracked on his opinion and hasn’t shied away from the speaking about it.

Then it was THAT other question, we can’t remember the exact question but it was something like “blah blah blah You and William Shatner?”

The audience groaned. George’s response was with good humour stating that it’s something Shatner made up a feud between them each time he needs to sell a new book!”.

The Voyager and TNG panels are a spectator sport. Watching the banter between the cast feels like you are a fly on the wall. We can imagine this is just what it was like on set.

We know they are all actors but my god (the one from Star Trek 5) they are all good at impressions! Michael Dorn did a very good Troi and the space jelly scene from Encounter at Farpoint that we hadn’t heard before.

As we go to more conventions we are aware we are unlikely to hear anything new from the actors however it is always a pleasure to watch, listen and most importantly laugh.

However we did learn something new and that was why ‘Data’ is pronounced ‘Day-tah’ and not ‘Dat-ta’ (unless you’re rude like Pulaski). Apparently there was an on-set rule that the first person to say a noun would make that pronunciation canon. Patrick Stewart first said ‘Day-tah’ in his best Queens English, thus setting the standard. Brent Spiner made an observation that this has affected the American-English language causing a cultural shift in how the word is pronounced.

We love this notion that the first person to pronounce a word made it canon. The beastie boys need to re-release “sabotaaaaage” #STLV50

We attended the Roddenberry Entertainment panel as Rod and Trevor Roth are Executive Producers on Star Trek Discovery and we want to listen very intently to anything they have to say. The panel opened with a video of Nichelle Nichols singing Happy Birthday to Star Trek. We haven’t heard her sing in years and although a recording, it was still a pleasure.

On the most part the panel was a repeat of the missing footage however then the audience asked questions and there was only one thing on our minds… DISCO!

Rod Roddenberry (do we even need to mention that he is Star Trek creator Gene Roddenberry’s son?) spoke about how he was reluctant at first to take the position as Executive Producer as he felt Star Trek was very much his fathers but it was Bryan Fullers involvement that changed his mind.

“Bryan Fuller is amazing. He is like us and he gets Star Trek.” – Rod Roddenberry

Someone asked the question “Would their be a transgendered character or person with internal conflict in Star Trek Discovery?”

Trevor and Rod responded that they can’t give any specifics or details (because of the suits!) but Bryan Fuller was keen to explore the human condition.

Just as we thought they had diplomatically navigated the question Rod exclaims “You won’t be disappointed!” (we actually heard phaser rifles load and take aim!)

We schmooze around the signers room, big hello to Melanie Smith (Ziyal and honourary Trekkie Girl), our favourite person Larry Nemecek (fact: he always had the longest queue at his table).

Always amazing to meet a fellow Trekkie Girl you have to drop into see Melanie Smith @CreationEnt #STLV50 pic.twitter.com/Nk8oVrQUmJ

We run to the Roddenberry lounge for a Champagne toast to Star Trek (This is soooo us!) An amazing cake comes out, we all toast and sing happy birthday to Star Trek and we run to our next appointment with the fantastic Jordan Hoffman at the Official Engage Podcast. They had locked him in a little room to keep him out of trouble but nonetheless it was great fun talking to him, even though our brains go blank as soon as a microphone gets near us!

You can listen to it here! Via the Official Engage Podcast. Don’t forget to subscribe!

I met the @TrekkieGirls and did the same Guardian of Forever pose everyone else does with them! #stlv50 pic.twitter.com/HXMNQSWAbH

That evening we were lucky enough to attend the Captains party at the Voodoo Lounge at the top of the Rio which is an amazing event and incentive to purchase one of the packages. We got there just in time to hear Ethan ‘Johnny’ Phillips starting his side splitting comedy routine. These jokes were dark and wrong…. our sort of humour!

Then the band ‘Sons of Kirk’ played their set whilst we admired an epic fireworks display. Although they were celebrating 50 years of Caesars Palace, we like to think it was for Star Trek.

We met up with some old friends and new, Neil, who Sam had met on the flight out, The guys from 5 Year mission – the house band who worked their drumsticks off all week, the guys from Sons of Kirk; Mike, Gary and <name>  and of course Jim Moorhouse aka @EnterpriseExtra aka #TheFanWhoFiredThePhasers … and probably the shields too?!

Jim had given his own panel about his experience as an Extra on Enterprise…. Where he fired the phasers! He is a blast, a true gent and we love listening to his stories. Maybe he might fire the phasers on the Discovery one day?? Make It So!

No.1 party in Rio was on roof at #STLV50 w/ @5YearMission & @TrekkieGirls! Some serious Trek love happenin’ tonight. pic.twitter.com/18O3qrhGQk

Evenings like this are the best reasons to go to conventions, how often do you have the chance to meet people you hardly know, but feel connected and safe discussing your dream crew, when you hope the new series will be set, your vision for Star Trek’s future?

We must briefly mention Barfleet (briefly because that’s all we recall!). Barfleet is a group of fans who hire a suite at conventions and turn it into a BAR!!! That’s right! What a great idea. There are strict rules about no photography and they ID everyone coming in but it’s a fantastic idea that we should bring to the UK. What an incredible bunch of people who give their time and money so others can have fun after hours at conventions. You are true philanthropists carrying forward Star Trek’s philosophy…. By giving us alcohol!

We did not feel so good about this idea the next day though.