Well, if they upped the ante with Season 3, then they completely smashed it through the roof with the Season finale cliffhanger! How on EARTH did you guys wait an entire year for the new Season to start? I could scarcely get the DVDs swapped over quick enough!

From the off, you just know there’s something a foot – the music is eerie and there’s a certain note of desperation in Picard’s voice as he records his “Captain’s log”. I don’t recall an ‘opener’ (before the credits roll) as short as that in any of the episodes I’d watched up to that point? It’s like, okay, brief introduction, let’s get the hell on with the story! And by God, didn’t they do that?!

I could literally bang on about these two episodes FOREVER! So much content. So many unanswered questions. Terrific acting (and directing!).

My highlights of TBOBW included: –

As I’m sure you all know by now, I do have a bit of a soft spot for Riker, so if for no other reason that made these my perfect episode(s) – I loved seeing him take centre stage. Although obviously a pivotal part of the plot, Picard was not the sole (or even main?) focus of the episodes, which, particularly in a season finale, I find quite refreshing.

To find out that The Melbourne is the 3rd command position that Riker has declined, you do find yourself asking the question: what is he waiting for? When Picard says “The Enterprise will go along just fine without you” – that’s what he’s afraid of?! And when Troi asks “what do you want Will Riker?” we all know the answer – he’s holding out for command of the Enterprise. Not that he wants Picard gone, but ain’t nobody else getting that job over him?! His (albeit temporary) promotion in the end is bittersweet.

Truth be told, I don’t think Riker was quite ready to be Captain at the start of the episode. When Troi has to point out that it’s not appropriate for him to go on the away mission because he is now Captain, it’s funny, because that’s the very thing (his “spunk”, his pizazz) he’s talking to her about having “lost” earlier on in Ten Forward. And now he’s being reprimanded for it? Poor Troi, you could tell she didn’t like having to do it – but she was right! (I just loved watching Dr. Crusher in the background – it was like she was watching a game of tennis?!) However, by the time he commands Worf to “fire” at the end of Part 1, he’s got “it”, he’s ready. He made the decision that he thought condemned Picard to death, without flinching. He’s going to make a fantastic Captain!

(They do really need to get him a larger top before this though – he keeps having to pull the current one down?!) In the end he just needed someone to remind him of who he was, what he wanted, where he was aiming… 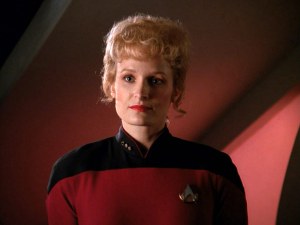 Although she does have the most peculiar shaped head, love her, or hate her, the introduction of Shelby is brilliant. You know hers and Riker’s relationship is different right from the start – there’s tension there, but at the beginning it certainly isn’t sexual, unlike practically every other Riker-female relationship in the series so far. I had to stop myself writing ‘Riker likes the “helpless female” act’, but that wouldn’t exactly be fair to Brenna Odell (“Up The Long Ladder”), as she was the very definition of feisty. But let’s just say, he likes his women to be women. Feminine maybe? Put it this way, it’s probably the first time Riker’s invited a woman back to his quarters, knowing full well he’s not going to get laid… ;p I’m trying not be all old fashioned and sexist here, but I hope you know what I’m trying to say? Shelby is presented more as an equal, she is career driven, she wants Riker’s job and is quite open about that. I love that the similarities between the two of them are pointed out to Riker on more than one occasion! The antagonistic relationship between them is gripping to watch – such a clash of like-minded personalities? I seriously thought he was going to slap her in that elevator!!! What a bi-arch?! But the girl does good – even sitting in “The Chair” at one point?! And ultimately if you were picking teams in the school yard, you’d want her on yours?! And even Riker realises that in the end…

I know I’ve already spoken about the wonderful Guinan in Pt 1 of my review, but she is absolutely phenomenal in these two episodes! Again, we see Picard confiding in her, as he seems to do no other. Whoopi and Patrick acting together is cosmic – I could watch them all day. You genuinely believe that they are old, dear friends.

When she explains to Riker that their relationship is “beyond friendship, beyond family”, I’m literally gagging to know more. Riker seems very dismissive of Guinan initially when she comes to him after Picard is kidnapped. At this point he doesn’t see her worth. I love the way she smirks at him because he doesn’t know why they’re so close, and then she sits in Picard’s… his chair – brilliant! She doesn’t give him chance to question or argue, and I think the advice she gives to him in this scene is a game-changer. Her words resonate with him: “when a man is convinced he’s going to die tomorrow, he’ll probably find a way to make it happen.” A self-fulfilling prophecy indeed. Later on, we realise that Riker has a plan up his sleeve, as he launches the shuttlecraft with Data and Worf on board (awesome plan BTW!). Riker looks all smug with himself, but I’m genuinely not sure things would have played out like this, had it not been for Guinan’s pep-talk? She helped him realise his potential, in stepping out of Picard’s shadow, embracing the leadership and prompting him to think “outside the box”. Hopefully now he sees her worth? She well important that Guinan!

So, the Borg. This enemy is such a shock to my perfect little Star Trek bubble. It’s like, you genuinely don’t know how you’re going to stop them. I’m not used to seeing such scenes of violence and destruction in the idealistic vision of the future that has been my experience of TNG so far? 900 people, just wiped out. Watching the crew strategizing for war; facing their own mortality. I don’t remember ever seeing Picard pace before…

When you see that cube on the viewing screen again, and then you see the size of the cube in comparison to the Enterprise…OMG!! “We have engaged the Borg” – that has to go down in ST history as one of the best lines EVER!!! Literal shivers down my spine. 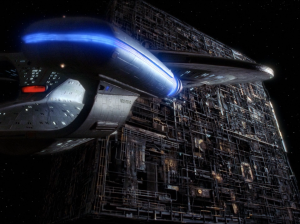 And then they hail Picard BY NAME!! – wowsers!! As if they weren’t shiz-scary enough?! The concept of Picard becoming all Borgified was genius. I mean, to face an enemy that has such a non-discriminate, blatant disregard for life, concerned only with the continuation and improvement of its own species. To then see them consciously choose someone because of their “potential” for the collective, because they believe a human voice will “facilitate their introduction in to human society”, i.e. the “assimilation” of humans. We’ve not seen the Borg thinking like this before – rationally – they’re learning, and that is a positively terrifying thought. Seeing the Borg in “Sector 001, the Terran system”, in such close proximity to Earth – “The Mars Defence Perimeter” (which ultimately turned out to be completely useless?!) – is a sobering thought indeed. Who knows what the future will hold.

And is it just me, or must the wreckage scene, with all the broken up spaceships of battle Wolf 359, have been at least in part the inspiration behind the strikingly similar scene in JJ’s Star Trek movie? #justsaying

Just thinking about it gives me chills! And to include ‘The Melbourne’ – the ship Riker was just offered promotion on? Yes, I see what they did there…

On a slightly less note depressing note though – I do love the “battle bridge”! It’s dark and ominous.

This review would of course not be complete without a nod to the one and only Sir Patrick Stewart, aka Locutus of Borg.

His performance in these episodes was outstanding!!! The power of a single tear… how did he do that?! There are so many bits of his performance that I loved, from Locutus calling Riker “No.1”, to the way Picard says “everything” when asked what he remembers. It’s all so loaded; so exquisitely executed. And that ending? So poignant. As he stares out of the window, you just know that the ramifications of this are going to be huge? Not just for TNG, but I suspect throughout the rest of the franchise. #nospoilers. These two episodes have changed everything. And I. CANNOT. WAIT!

Side note: TrekkieGirl Sam has made me realise that I’m always on the lookout for romance. Apologies about that! I think it’s because I grew up with the ultimate “will they/won’t they” in Mulder and Scully, The X-Files. If there’s no burgeoning sexual tension between characters, that’s it, I just become really bored and uninterested. (This happened when I tried to start watching the new incarnation of Hawaii 5-0, even the beautiful Alex O’Louglin couldn’t keep me interested, there was just no romantic chemistry to hook me in!?) Sam said that she never paid attention to the “romances” back when she first watched ST, they were almost just like a distraction from the good stuff, a filler? I guess this is partly because she was a mere babe back then (children of the 80’s were a lot more innocent), but also because she’s always been a giant geek! That dresses up as Captain Picard, complete with nude shower cap, on a school fancy dress day, more concerned with why the warp core is malfunctioning, rather than musing over whether Troi and Riker will EVER actually get together?! But then that’s the whole point of #TNGrevisited – to see Star Trek through ‘fresh eyes’, from somebody else perspective. I do hope that despite my romantic digressions/obsessions, you’re enjoying my ride?